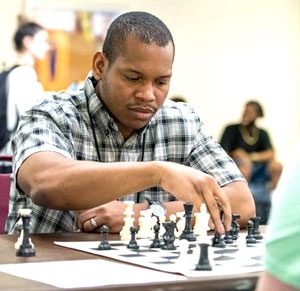 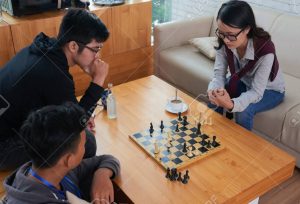 Some students may just need some counseling, while others may need intensive help. Whatever your need, click the button below  to schedule your appointment.

If you’re interested in becoming a more serious chess player, I will analyze your games and discuss how to study and improve.

Chess is a game of generalities, details, and calculations. When using generalities, you must take one idea and apply it to several different situatons (this is one of the most difficult things to do that is required in mathematics courses). In all professions, you must play close attention to details. And as we all know, poor calculations have had lifelong effects on people.

Chess requires a great deal of patience. Wouldn’t it be nice if more people were patient with each other? Are you a victim of a “quick-temper”? Do you react, then think? Chess does an excellent job of improving patience.

As with other games, chess can be very fun, although challenging. Learning and having fun at the same time are some of the most important reasons for learning how to play chess.

Here are the basic rules about chess. It’s not nearly as difficult as people think. So stay relaxed and follow along.

Setting up the pieces

The King moves one square in any direction. If there is another piece next to the King. The King cannot occupy that square. When it captures an enemy piece, it occupies the square of the captured piece.

The Queen moves any direction and any number of spaces. It is the most powerful of all the chess pieces. There are two possible obstacles. It cannot jump over other pieces or displace pieces of its same color. If there is an eneny piece in its path, it can capture that piece by occupying the square of the captured piece.

The Rook moves horizontally and vertically one direction at a time. It cannot displace or leap over its own forces. The Rook captures in the same way that it moves.

The Bishop moves and captures diagonally. it cannot displace or leap over its own forces.

The Knight is the only piece that can leap over his own or opponent’s pieces. It moves a total of three squares in either one of two ways: a) one square forward or backward; then two squares to the right or left or b) one square to the right or left; then two squares forward or backward. If the knight is attacking an enemy piece, the knight only replaces the enemy piece in which he lands. Another thing to notice is that the knight changes square colors each time it moves. If all pieces were removed from the board except the knight (which we will place on E4), the possible squares that the Knight can move are: D2, F2, G3, G5, F6, D6,C5, and C3.

The Pawn can only move in one direction: straight ahead. If the pawn is moving from its starting position, it may move forward one or two squares. After that it can only move straight ahead one square. However, a pawn cannot move forward if it is being blocked by one of its own or enemy units. The Pawn’s capturing methods differ from the way it moves. The pawn can take an enemy unit if it is located on one of the diagonally-forward adjoining squares. A pawn cannot capture an enemy unit directly in front of it.

Now that we know where the pieces move, here are the rules.

The King is the most important piece in chess. The basic method to winning a game of chess is to attack the enemy King in such a way that it cannot escape from attack. Any attack by a piece towards the enemy King is called a “check” (You generally say “check” to your opponent). If white moves a piece and then says “check”, that means that white can capture black’s King on its next turn. When a King is “checked” (black in this case), he must get out of check in one of three ways:

If black cannot get out of check, then black is “checkmated” and white wins the game.

Here are some special kind of checks:

This type of check is caused by removing a piece to another square to unmask a line of attack by another unit. For example, if the Black King is on H8, a white pawn on F6 and a white bishop on A1, if it is white’s turn to move, white can say “check” by moving his pawn forward (because the white bishop can capture the King on white’s next turn). So white’s bishop can give “check” without moving.

This type of check has an added feature. The piece that unmasks an attacking line also gives check. For example, if the Black King is on H8, a white Queen on H3, and a white bishop on H4, if it’s white’s turn to move, white can say “check” by moving his bishop to F6. Now black is being “checked” by the white bishop and the white queen. Black’s only option in this case is to move the King out of the lines of attack (in this case, black’s only move would be to move the King to G8)

We have seen what happens when a King is exposed. The special move known as Castling offers a valuable method for safeguarding the King against attack. Castling is the only move in chess which is really two separate moves – a King move and a Rook move. Castling can only occur once per player per game. A player can either castle King side (with the rook closest to the King at the start) or Queen side (with the Rook closest to the Queen). This occurs by moving the King two squares towards the Rook (whether it be the King side or Queen side rook) and placing the rook adjacent to the King on the opposite side. Now here are some restrictions.

Castling is permanently impossible if:

Castling is impossible for the time being if:

Castling is feasible when these limitations are removed.

If a pawn reaches the last square in a row, it can (and must) be promoted to a new bishop, rook, queen, or knight. A player usually promotes to a Queen since it is the most powerful piece on the board (Sometimes, if a rook is captured, it is turned backward and often signifies the promoted piece)

This issue won’t be addressed in these basic rules. This is a more advanced topic involving the capture of pawns. It is a special capturing procedure which is optional (only in one very, very extreme circumstance would en passant be required (if this is the only way to get out of “check”)). Do not worry about this right now.

This will tell a player if he has a “material” advantage in the game. This will also tell you whether you should trade a captured piece for one of your own.

How Games are Drawn

Perpetual check – This occurs through an endless series of checks which the opponent cannot avoid. If white and black move back and forth a total of three times each, the game ends in a “draw”(tie).

Stalemate – In the case of stalemate, the following conditions must be present:

For example, if there is a Black King on H8, a Black pawn on H3, a White pawn on H2, a Black bishop on E3, and a White King on A8, and it is white’s turn to move, all three conditions apply and the game would be a “draw”.

Based on the position of the pieces, the two players can agree to a “draw”.

These are the rules. This looks like a lot. After practice, these rules will make a lot more sense to you.